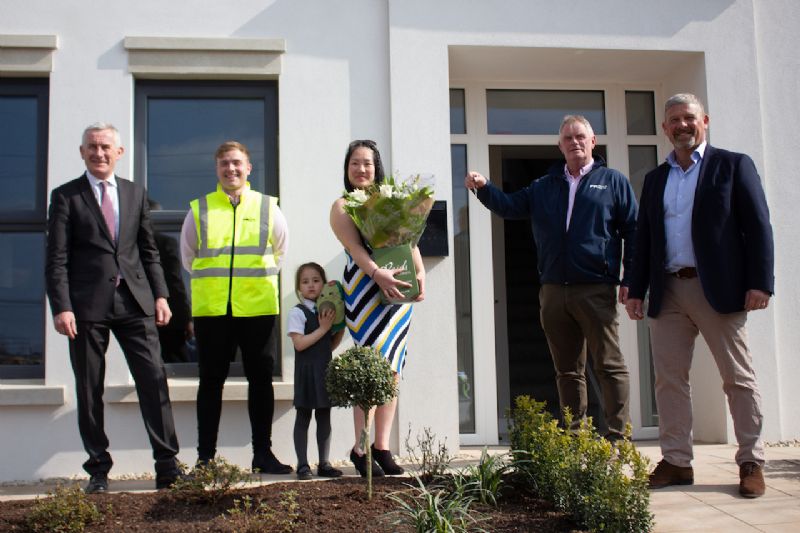 It was a momentous day for leading property developer, Fraser Millar, as they completed the handover of the first home in their flagship £70M Lancaster Park development - the largest certified Passivhaus residential project in the whole of the UK and Ireland.

May Lee and her family have moved into Lancaster Park and say it delivers everything they were looking for their young family; built to Passivhaus low energy building standard with clean air filtration system and a fully electric heating system, meaning a reduction in bills and a healthier living experience for the family. It is close to the City centre, on the main bus route, adjacent to excellent schools and in a safe, green area.

The Lancaster Park development will span 219 houses across 26 acres and is the first developer-lead Passiv Haus scheme in Northern Ireland for the buying public bringing the future of housebuilding into the current day. The project has set the standards for Northern Ireland’s greener future in construction and domestic living.

The first 21 homes in Phase One sold out in one hour and will complete weekly from 1 April 2022. They will consist a range of three and four-bedroom, semi-detached and detached family homes. Phase Two is currently in construction and will be on release very soon.

The Passiv Haus LEB homes have all been built with rigorous design and construction practices according to principles developed by the Passivhaus Institute in Germany. They all feature enhanced insulation and airtight sealing, alongside electric Nilan Compact P air source heat systems and will be the first large-scale residential development with an Energy Performance Certificate (EPC) A rating, meaning optimum energy efficiency, unrivalled in any other development of its size in Northern Ireland. The homes will require almost no heating, no reliance on fossil fuels and will have
cleaner air inside than out.

Home heating costs will be consistently showing savings of approximately 40% against more traditional oil or gas systems,  for the average home, per annum (based on current NI fuel prices). The way the houses are designed and built eradicates the reliance on fossil fuels for the home-owner.
Developer David Millar said: "This is a momentous day and one in which the Millar family, our dedicated construction team, design staff and partners at the Passivhaus Institute in Germany are delighted to see – and I thank them all for their hard work and dedication to this project over
the past 2.5 years.
“Lancaster Park has been very well received to-date and to see our first purchaser move in is a brilliant feeling.

"Fraser Millar has embraced absolute best-practice and the gold standard in home building in this exciting new development.  The homes required a completely different style and method of build, to the exacting Passiv Haus standards,very different than we have been used to for the past 50 years. It took longer and
was more expensive, however, the additional costs were not passed onto the buyer. It has been a complete education and has allowed us to adopt best practise for the entire company moving forward.”

Homes built to Passivhaus standards can consume up to 90 percent less energy than older buildings and 75 per cent less energy than the average new build. This is because they only need an additional heating source when the weather is very cold. In the summer months, an automatic summer bypass will actively reduce the temperature inside the house to comfortable levels. As well as the obvious financial savings for homeowners gained from slashing utility bills, Passivhaus building methods will help governments meet emissions-reduction targets, especially in the construction
industry. According to a recent United Nations study, sustainable house building will help meet the World Green Building Council's aim of achieving complete carbon neutrality in home buildings by 2050.

David concluded: “We are proud to be setting the standards for Northern Ireland’s greener future in construction and domestic living. We wish Mrs Lee and her entire family the happiest and healthiest of futures in her new home.”

Simon Brien, partner at Simon Brien Residential continued:
“Today is a landmark day for Fraser Miller and indeed us as the selling agents.

“Homes in Lancaster Park are not only contemporary, attractive and practical, but are also built to a rigorous energy efficient
design standard and are a first of their kind in Northern Ireland.
“This innovative development will not only create low-energy homes but are at the forefront of a global green movement. These homes are well sought-after and will deliver significant savings in energy costs for home owners which is of paramount importance in the current climate and for the future.

Simon Brien concluded: “Phase One sold out on the first day of release today marks the first family moving in with further completions
scheduled over the next few weeks.  The next release at Lancaster Park will be in late Spring and there is already exceptional demand.”

Located just 15 minutes from Belfast city centre, near the Saintfield Road, the second release of Lancaster Park's Passivhaus project will be announced soon and will feature PV solar panels, as standard,  to further reduce the homeowners’ energy bills.